The Coton is a robust, charming, small dog with a cheerful disposition. He will show everybody in the family just how much he loves them.

The Coton de Tulear (pronounced cu-toe de too-lay-are) originate from the island of Madagascar, as a breed preferred by the Malagasy noblemen and originally could only be owned by Malagasy royalty.  It is sometimes referred to as the "Royal Dog of Madagascar" and has been documented as such for more than three centuries.  It is believed the breed evolved from other small breeds brought to the island by European merchants.

The Coton de Tulear is an adorable dog packed with personality.

Cotons are bred to be the ideal companion: they are lively, alert, and slow to anger.  Their smaller size and cuddly disposition make them excellent lap dogs or companions to sit at your feet.  They are easy to train and get along well with other pets, such as cats.  They retain a puppy-like demeanor and are fond of silly acts, including little tricks such as walking on their hind legs.

The standard of the Coton de Tulear was established in 1969 and submitted to the "Federation Cynologique Internationale" (FCI) in 1970.

Stella's puppies were born on Oct. 7 and are available for adoption in early December. 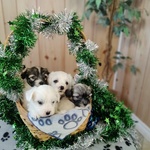 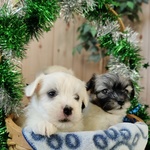 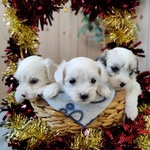 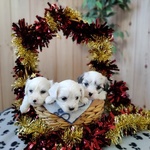 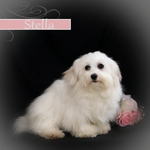